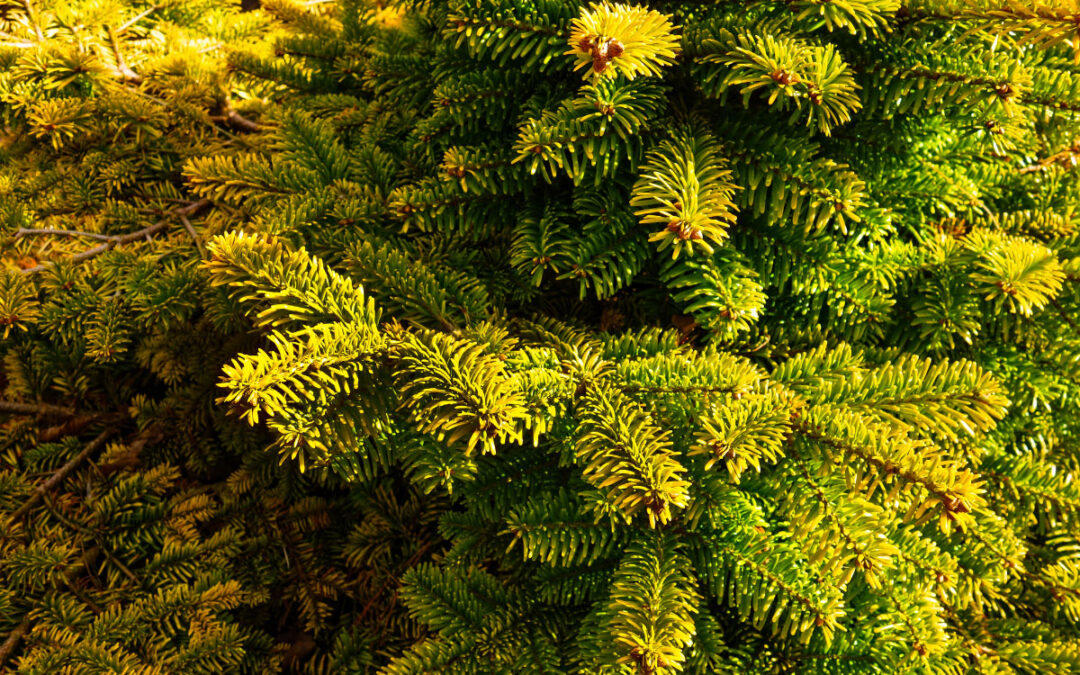 In late summer and early fall evergreen trees often have needles that dry out and shed. This can be alarming for gardeners, and it can be difficult to tell if early needle drop is cause for concern or just part of the evergreen tree’s annual needle shed.

It is typical for all evergreen trees to shed out old needles in the fall. Fall needle drop is usually preceded by yellowing of old (often interior) needles. Sometimes needle drop happens in early summer, especially if a tree has been recently transplanted. Trees can lose up to 90% of their roots when transplanted, which seriously hampers the tree’s ability to provide its needles with vital water and nutrients. Therefore it is common in the first few years after transplant for a new tree to have needles that turn yellow or brown weeks or even months before they typically do in fall.

Older needles on the inside of evergreen trees are shed each fall after they turn yellow, brown or reddish tan in color. Sometimes this natural process is very subtle and goes unnoticed, but this year is quite evident in many trees, particularly spruces. However, the bottom line is natural needle drop this time of the year is a normal process, not a disease or insect problem. Pine trees can hold their needles for 2-5 or more years, depending on the species. Spruce trees generally hold onto their needles longer than pine trees do, approximately 5-7 years, which serves to hide the browning needles.

There are some instances when summer needle shed and discoloration may be symptoms of more concerning health threats such as beetle activity, mites, fungal disease, or root damage. Here are some signs of these issues that you can look for:

When bark beetles attack trees, they first chew through the bark and then tunnel around beneath the bark in the thin layer of the tree’s growing tissue known as the cambium. This can result in sudden red discoloration of needles (in pines), or slow and steady browning and dropping of needles (in spruces). To tell if needle discoloration is caused by beetle activity, look for other symptoms of bark beetles such as small entry holes in the tree’s trunk, fine sawdust collecting in the bark or base of the trunk, and/or thin sap streamers dripping down the trunk of the tree.

Another creature that can cause discoloration of needles is the spider mite. Spider mites cause extensive damage and stippling to affected needles as they feed on their host’s sap. Webbing may even be visible on heavily infested branches. Improving the general health of affected trees is recommended, and miticide sprays are available to treat heavy infestations.

Spruce and pine trees can be prone to several fungal infections that can lead to needle discoloration and early drop. There are fungicide sprays available that can prevent spreading of fungal infection to new growth and unaffected trees in the area. Cultural treatments such as removing fallen needles and creating better airflow through tree canopies are also recommended.

If the discoloration and shedding of needles occurs in a spiral pattern up the tree, there is a good chance the premature needle drop is the result of root damage. Trees tend to spiral slightly as they grow, so when a root is damaged, it is unable to provide vital nutrients and water to the living tissue it is connected to. This results in the spiral pattern of dieback from damaged roots. Root damage can be difficult to troubleshoot, since they are not visible below ground. But common causes of root damage include root girdling, root severing/damage from digging (e.g. utility repairs or sidewalk installations), or damage from absorption of salt, chemicals, or pesticides. Needle drop from root damage can be isolated, and the tree will usually recover in time with proper treatment.

If you need further advice on evergreen needle drop, you can rely on us to help you identify the pest and help you to eliminate it. Call us anytime to set up an appointment!