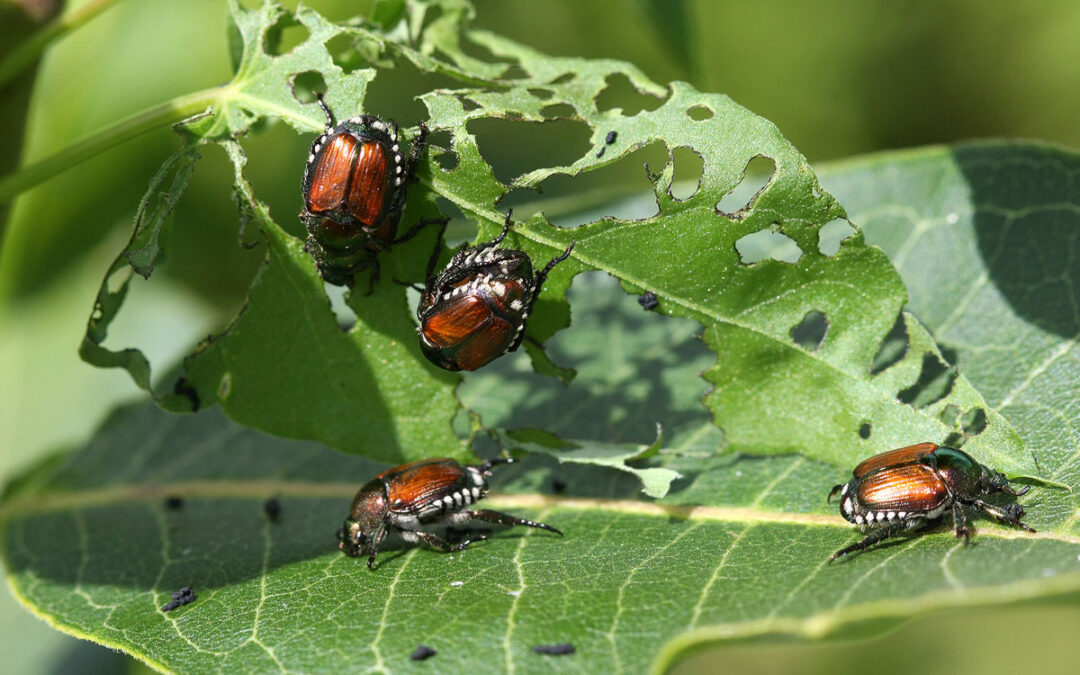 With over 300 ornamental and edible plants they like to feed on, Japanese beetles (JB) can quickly become an overwhelming insect in the landscape. Last year, one customer brought in his peach so covered in Japanese beetles that it was hard to identify the fruit as a peach!

If you didn’t have Japanese beetles last year, then hooray, you may not get any this year or if you do get them, they will be in low numbers. But if you had JB last year, chances are very good you’ll have them this year, too.

For perennials and roses, systemic products containing imidacloprid can be used in May to allow time for distribution within the plant. Topical sprays containing bifenthrin or chlorantraniliprole will keep JB populations down while limiting the amount of injury or death to bumble bees and other pollinators. This can be done when the adults emerge, usually in June.

Treating the soil for JB grubs does control this immature life stage but does not create a force field of protection to keep Japanese beetle adults from flying in from other areas. Where there is food, the Japanese beetle will feed.

Using Japanese beetle traps is NOT a good idea because the traps are too effective at what they do. Research indicates JB traps attract more beetles to the yard than those yards that have no traps, resulting in more damage to trees, roses and edible plants.

Linden trees can be a magnet for Japanese beetles. Treatment options are limited because it is illegal to use any systemic insecticide (one that moves internally via the tree’s vascular system) on linden trees. Contact Liberty Lawn & Landscape, Inc. for treatment if your linden and/or other landscape plants have Japanese beetles.

Don’t hesitate to get in touch with us if you have any questions or concerns about Japanese beetles in your landscaping!